Moorbottom and St Lukes, a Community

The parish of St Luke, Cleckheaton, was formed in 1878 by taking portions of the surrounding parishes of  St John’s Cleckheaton, Whitechapel Cleckheaton and Christ church Liversedge. The initial service took place on St Luke’s Day 14th October 1878  and was conducted by the Rev. A. L. Winnifrith in the local school rooms in School street which had been built by the school managers of Whitechapel 20 years earlier.

Service’s continued in the school rooms until the following year when the first church, known as “The Iron Church”  was opened for services, this was built on land owned and donated by the Low Moor Iron co. 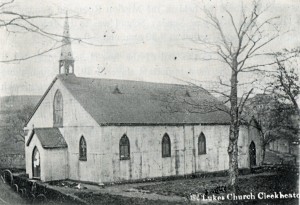 In the church magazine of October 1886 it was announced that steps were to be taken to build a permanent church. Following this announcement donations started to come in and fundraising started in earnest, land was once again donated by the Low Moor Iron co.

The tender for the building of the present church was given to J. W. Beanland of Bradford and the  foundation stone was laid on 22nd October 1887 by the Bishop of Ripon.     The church cost £7,250 to build and when new could seat 650 people.

The church was consecrated on 27th May 1889 by the Bishop of Wakefield, the Right Rev. W. Walsham How, with the service starting at 11.00am and lasting over two hours, this was followed by a public lunch in a temporary building erected in the school yard.

The building of the vicarage commenced on May 1st 1896 after the clearing of old cottages on land at the side of the church and the vicar moved in the following October.

1913 saw the addition of the clock to the tower in memorial to Mr J. H. Leather benefactor to the church. 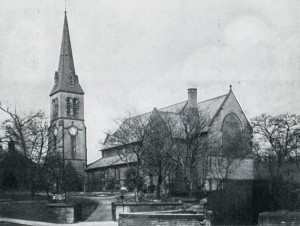 In addition to the vicarage an infants school was built behind the church in addition to the existing school this was completed and opened in October 1893, this school is still in use today,  the original school closed in December 1947 with pupils being transferred to Heaton Avenue or South Parade.

Under the reorganisation of schools in Kirklees St Luke’s school will close during 2012.

1931 saw the first meeting of the boy scouts at the church (16th Spen Valley) under the leadership of Mr Fred Long.

THE STORY OF A CHURCH  –  ST LUKES CLECKHEATON

“THE LITTLE TREE” written and illustrated by Martyn Branch, (available from St Luke’s) £2.